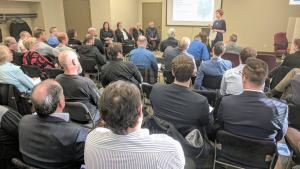 Nationwide, $46 billion in construction invoices remained unpaid beyond a 30-day period, an amount representing approximately 16 per cent of the estimated $285 billion in annual construction activity in Canada.

These were just two of the statistics that the 84 construction leaders who gathered at VRCA for a pair of meetings learned about the prospect of prompt payment legislation in BC. The sessions were organized by Prompt Payment BC, a coalition of construction trade associations and trade contractors working to convince the provincial government to legislate a solution to payment delays in the construction sector.

Timely cash flow throughout the construction payment chain is fundamental to a healthy construction industry. Delay in payment anywhere in the supply chain reduces profit, restricts innovation and investment in plant, machinery and people. It also increases the cost to finance company operations and drives up the cost of construction overall.

Delayed compensation throughout the construction payment chain increases risk and chokes economic growth. The impact of payment delays on small and medium-sized enterprises can be disproportionately severe, and even a minor delay in payment of one or two invoices can put smaller businesses under severe financial stress.

Already, federally-sponsored prompt payment consultations heard from contractors, subcontractors and suppliers who believe they are not adequately protected from payment delays and litigation to secure payment is too protracted and costly.

Construction in BC is a $16-billion-dollar industry and employs more than 225,000 men and women, making it the largest employer in BC’s good sector.

Prompt Payment BC is also surveying firms to further identify the scope of the issue in BC. Complete the survey here.