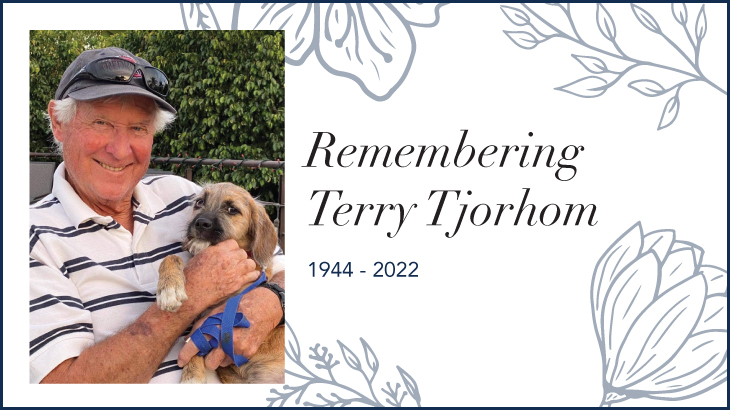 We are saddened to report the passing of Life Member of VRCA, Terry Tjorhom.

Surrounded by his five precious people, Hammy passed peacefully after suffering a hemorrhagic stroke in his favourite place – Cabo December 4, 2022.

Born in Vancouver June 18, 1944 to Ted and Lila Tjorhom and of proud Norwegian descent, Terry grew up in Champlain Heights, attending Killarney High and then BCIT where he took Building Technology and was part of the first ever graduating class. It was there that he met the love of his life and wife of more than 54 years, Lori. After a year long trip around the world in 1972, the couple settled down in Deep Cove in 1979 to raise their family and enjoy crabbing, dock beers, dog walks, Carol Ship parties, boat trips down the Arm, and so much more.

One of Terry’s many superpowers was being a loyal and loving connector, and kindness and acceptance were the core of his being. Known for his warmth and always at the centre of good times, Hammy made sure to check in on his friends and family frequently – not ever as an obligation, but because they truly mattered to him. The Tjorhom “core four” were as close any family could ever be.

Terry spent most of his career as a successful construction business owner. Those efforts allowed him to retire early and enjoy more than 23 years with his family, friends, and Lori as they built their “No Bad Days” community in Cabo (Roadhouse, Medano, golf, desert walks).  Terry became very involved in the Vancouver Regional Construction Association where he served on the Internal Relations Committee where he met many of his life long friends.  He also served on the Awards of Excellence Committee and for his work in the industry Terry was awarded Life Member of the Association in 2009.

Hammy loved life fully and happily every day, and it’s another guidance he leaves behind. We will do our best to continue his happy, hopeful, positive, and grateful legacy.

A Celebration of Life is planned for January 27 in North Vancouver at the Seymour Golf Club. Gracias to the BlueNet Cabo Care Team for their warm compassion and care.