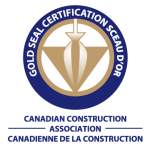 Currently, Cynthia is working on the Vancouver House Project for ICONWEST Construction, which employs approximately 350 workers across a job-site bigger than a city block. Within the next 6 months, she anticipates the number of workers to double. Cynthia is the Senior Safety Advisor on site, she also has currently three juniors that work under her direction and mentorship throughout the site as part of the Health and Safety Department.

They have a lot of trades on site and hire many temporary labourers and carpenters, who arrive on site via agencies designated to help individuals who struggle to find work due to personal circumstances. Workers that Cynthia encounter come in all states, whereas a few may have issues with addiction, others arrive on-site hopeful to turn their lives around. One notable story of change is of a man from a temp agency that arrived on-site over a year ago who’s had a rough go at life. He had made some poor life choices, but has worked hard to redeem himself. Today he works with Cynthia and has become a very appreciated lead hand on site and runs his own crew. He is a great example of someone that has taken advantage of the opportunity to change and has become one of Cynthia’s best success stories.

Cynthia is a firm believer of using a positive mentoring approach. She prefers to not use the title Construction Safety Officer to describe her role. Safety Advisor is better because of her dislike for seeming like a figure of authority. She prefers to be seen by her peers as an equal when she advises others on proper safety measures. She also firmly believes in positive reinforcement rather than only penalizing employees on errors. When she began working with her company she began implementing ‘good catches’, to encourage workers to correct hazards found on site. Once a quarter, approximately 20 employees are awarded prizes for their good catches that they brought to attention.

Cynthia began working in Construction by chance. She was going to University doing a Masters in History. During her semesters off, she acquired Advanced First Aid, and worked as a First Aid Attendant in construction in different industrial sectors. Through this experience, she discovered that she was skilled in operating as a safety person while on sites. She decided to pursue her NCSO certification through the BC Safety Council, and realized it was something she wanted to do.

“the health and safety industry is constantly changing and evolving, the Gold Seal designation gives you the opportunity to expand the scope of your knowledge across a variety of fields, not just in construction. It also allows you to move across Canada and meet a standard that is nationally recognized and broadens your ability across all fields. It’s definitely something I would recommend.”

Thanks to Gold Seal Certification for publishing Cynthia’s Success Story!