Business not at the forefront in the provincial and federal budgets 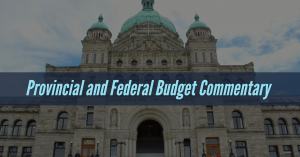 It’s not often that we can say the same thing about two budgets, especially when they are delivered by different levels of government in the same fiscal year. So, here it goes: The 2018-19 budgets will be good for individuals, however, not so good for business.

In the last 10 days, the provincial and federal governments released their respective budgets for the upcoming year. It’s the first budget for BC Finance Minister Carole James and the third for Bill Morneau, the federal finance minister.

At the initial review, the provincial budget is good for individuals and families. However, as we unpack the details, it’s clear the budget will increase the cost of doing business in BC.

The BC budget includes measures to reduce the cost of child care while improving availability. And it attempts to control houses prices by taxing speculation and foreign investment, while also investing in affordable housing and increasing the stock of rental units for individuals, working families and seniors.

There is little argument that having affordable child care and affordable housing is needed in Greater Vancouver. If individuals and families can’t afford to live in the region, we won’t be able to attract the workers needed to keep our economy going. As it is, the construction industry is already facing a labour shortfall of roughly 15,000 workers by 2027.

This new payroll tax will not apply to all employers. Companies with payrolls less than $500,000 won’t pay any tax, while those between $500,000 and $1.5 million will pay between 0.98 and 1.76 per cent. Companies with payrolls exceeding $1.5 million will pay the full amount of 1.95 per cent. In fact, during Question Period on Monday, James said 85 per cent of BC companies won’t have to pay the new tax because their payrolls are below $500,000.

We don’t know whether the provincial ratio of companies who will (15 per cent) and will not (85 per cent) have to pay the employer health tax holds true for our industry. We are surveying our members – 75 per cent of whom are small and medium-sized businesses – to confirm if they will be affected by the new tax.

However, we do know that when we include the increase in corporate income tax introduced last year, an increase in the carbon tax and hikes to the minimum wage, the cost of doing business in BC is on the rise. This will affect growth, investment in people, machinery and technology – all of which is needed to enhance productivity in today’s competitive marketplace.

We would like to have seen the provincial budget include measures to spur innovation, enhance BC’s competitiveness on the global stage, and improve its ability to attract overseas investment. This was a missed opportunity.

Interestingly, this mirrors the criticisms leveled against the federal budget this week. Critics were hoping for measures that would make Canada a more competitive and attractive country for business and investment, especially as American lawmakers cut taxes and NAFTA talks teeter. Like BC, the feds missed an opportunity.

The federal and provincial budgets rightly include measures to bring underrepresented groups into the workforce in areas such as skilled trades.

We’re happy the budgets support training given the labour shortfall our industry faces.

While the federal budget did little to address concerns about Greater Vancouver’s overheated housing market, we do appreciate the funding increase of $1.25 billion over three years for CMHC’s Rental Construction Financing Initiative, which offers low cost loans to support the construction of rental housing.

Where the two budgets differ is their commitment to capital spending. BC’s budget promises to invest $15.8 billion over three years on schools, hospitals, post-secondary facilities, roads and bridges. The investment is good news because it will deliver much-needed infrastructure in our communities and support BC’s economy by providing jobs during construction.

In contrast, the federal budget was missing a similar stimulus package. It did not deliver either funding or timelines for replacing Canada’s aging infrastructure. If it had, it would have created jobs in local communities and improved the overall quality of life of residents.

So, there it is: The 2018-19 budget – federal and provincial – will be good for individuals, however, not so good for business.

Create your own user feedback survey

Survey not visible on mobile? Click here to take survey